Honored to be included into the Arkansas Committee of the National Museum of Women in the Arts
2019-2020 Artists Registry.   Juror: Courtney Taylor, curator, LSU Museum of Art

My work was mentioned in a review of the 61st Annual Exhibition of Contemporary Art
by art critic and curator Vicky A. Clark in the Chautauqua Daily.

"...so I am offering, in no particular order, my shortlist of works from this show that I think
deserve more attention.

Six, the last piece on my list, is the boldest work in the show. “I Am Flower (Power Mask) Red, Yellow, and White” demands attention...  Two groups of flowers are arranged symmetrically in mirror images on the left and right sides of the inky black background. The reference to a mask in the title gives an idea of a performance prop, much like an African mask that becomes alive only through ritual. Although that is obviously not the case here, the reference increases the intensity factor. The color contrasts and rigid placement draw the eye and make us wonder about technique. "

Vicky A. Clark is an independent curator, critic, and teacher based in Pittsburgh.
She is currently working on the 2018 Biennial in Islamabad, Pakistan 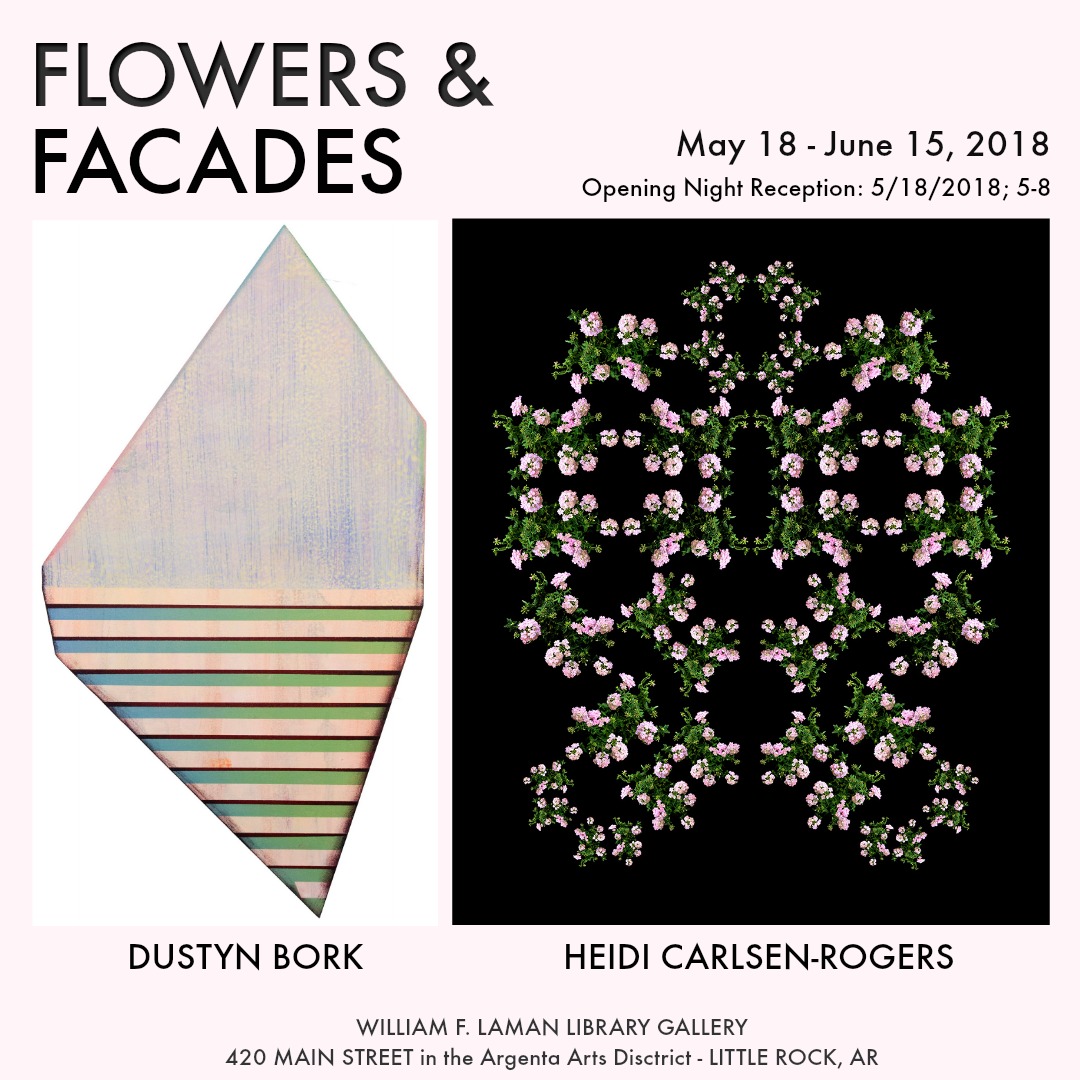 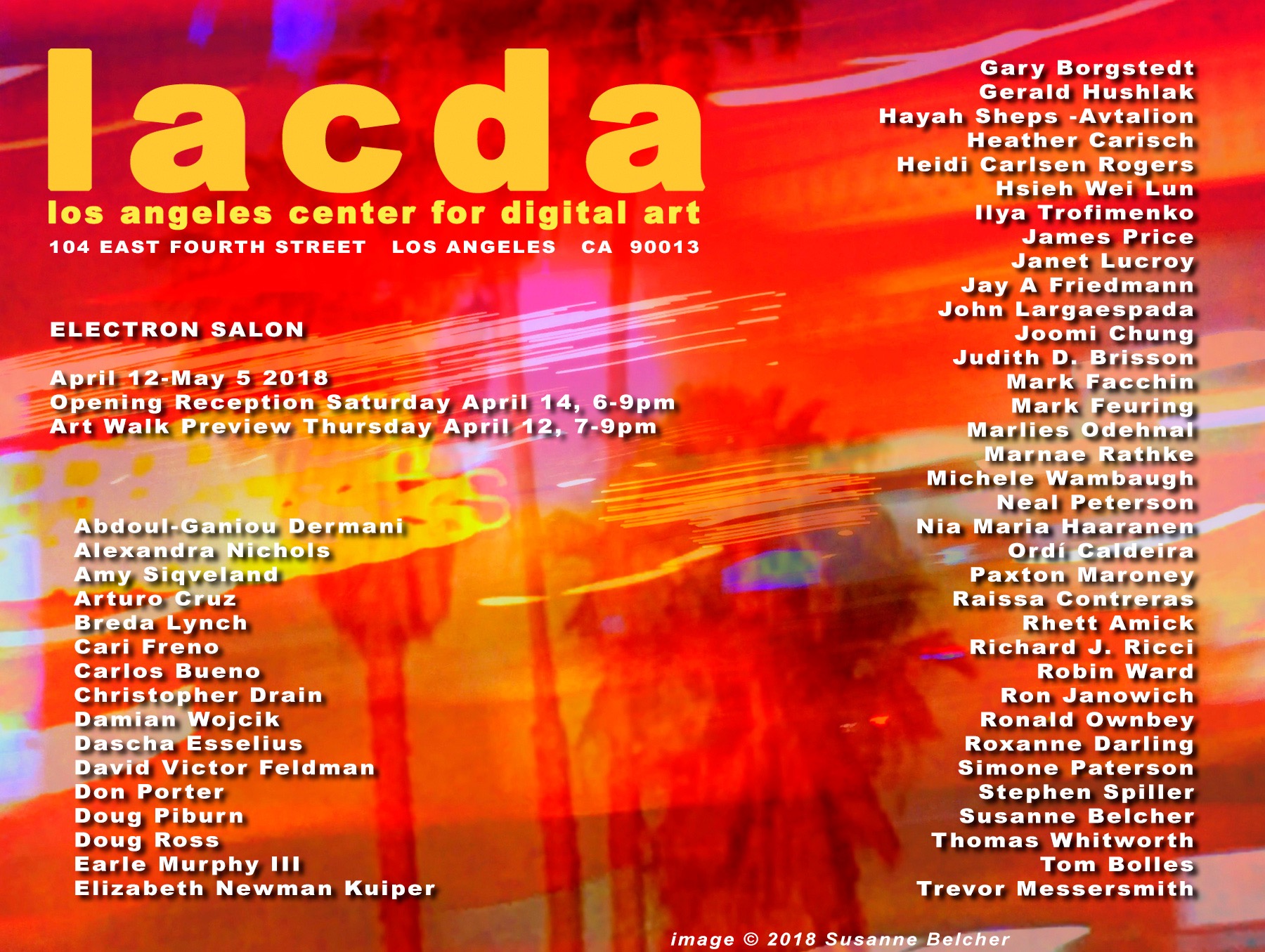 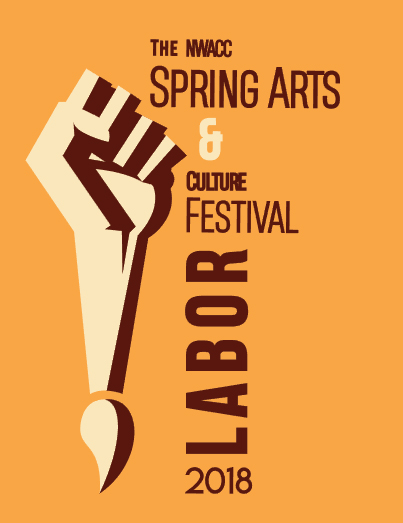 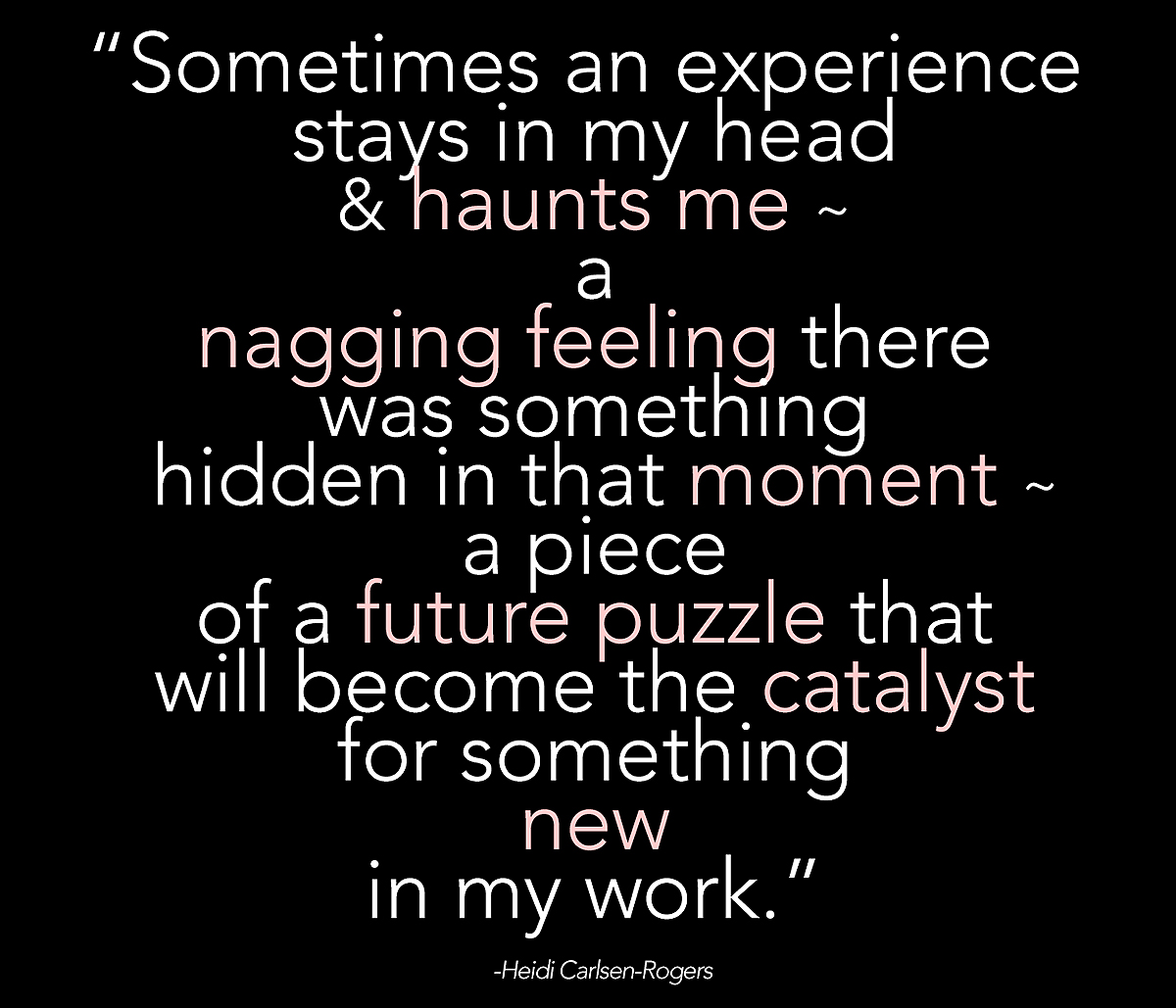 Two years ago, I had an experience that has stayed in my head & is part if the reason my work is shifting so drastically this year.
.
It was Easter Sunday in 2015 and I was up at an unusually early hour that morning with plans to attend a sunrise service.

.
I was really tired & stumbling around waiting for my coffee to kick in.  Every morning, I feed the birds - so I wandered out
onto our deck to fill the feeder with seeds.
.
It was completely dark outside, but there was a strange light illuminating the flowering tree in our backyard.

The tree was located on the edge of the woods that borders our property. Since it was that time
in the season between winter & spring, everything in the landscape was barren and lifeless – nothing
was growing and the woods were a tangled web of dead branches and tree trunks.

But this single tree had blossomed.

In the early morning darkness its small white flowers were reflecting a soft light and appeared to be floating in mid air.

The moon was casting such a strange glow - the only thing I could see were the blooms suspended
in the blackness – it was so magical and strange – and sacred at the same time.

Ever since that time, I have been thinking about black backgrounds, sacred things, and how light changes everything.
.
That moment with the floating flowers was the catalyst for the work I am doing this year.

Grateful to have my paintings included in volume 37 of Studio Visit magazine this summer - pages 30 -31. 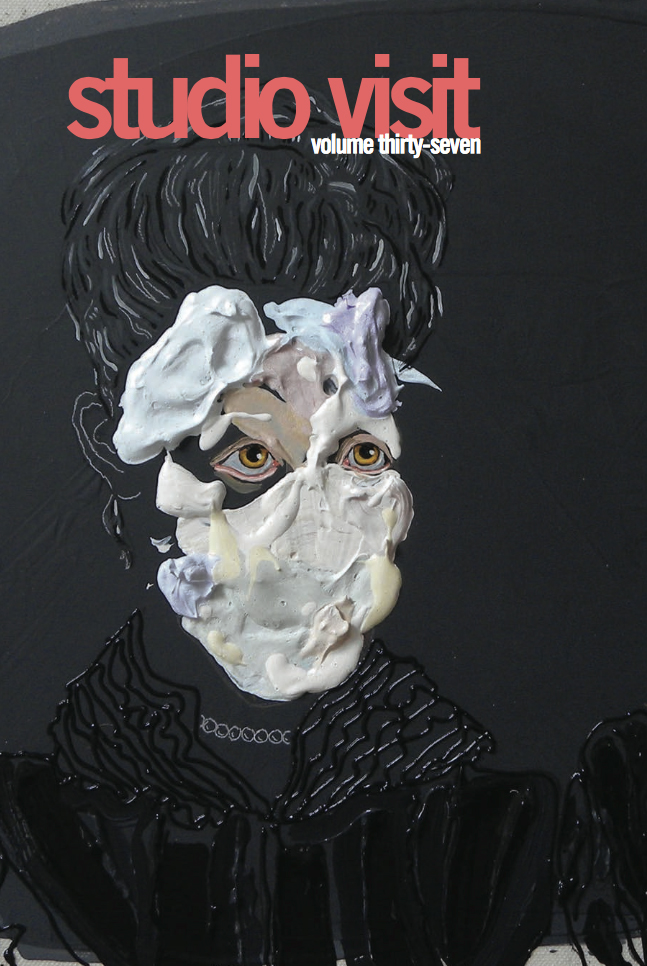 Excited to be interviewed by Equinox Literary Magazine and the staff from
the University of Arkansas in Little Rock this spring.   Grateful for the incredible article
and to share in such an in-depth way about my artwork & creative practice!

What an amazing experience in October during the Arkansas Arts Council Individual Artist Fellowship
reception in Little Rock!  So grateful to be one of the nine recipients of this generous
grant for 2016 and to have the opportunity to speak that evening about my artwork.  Truly an honor.
~ 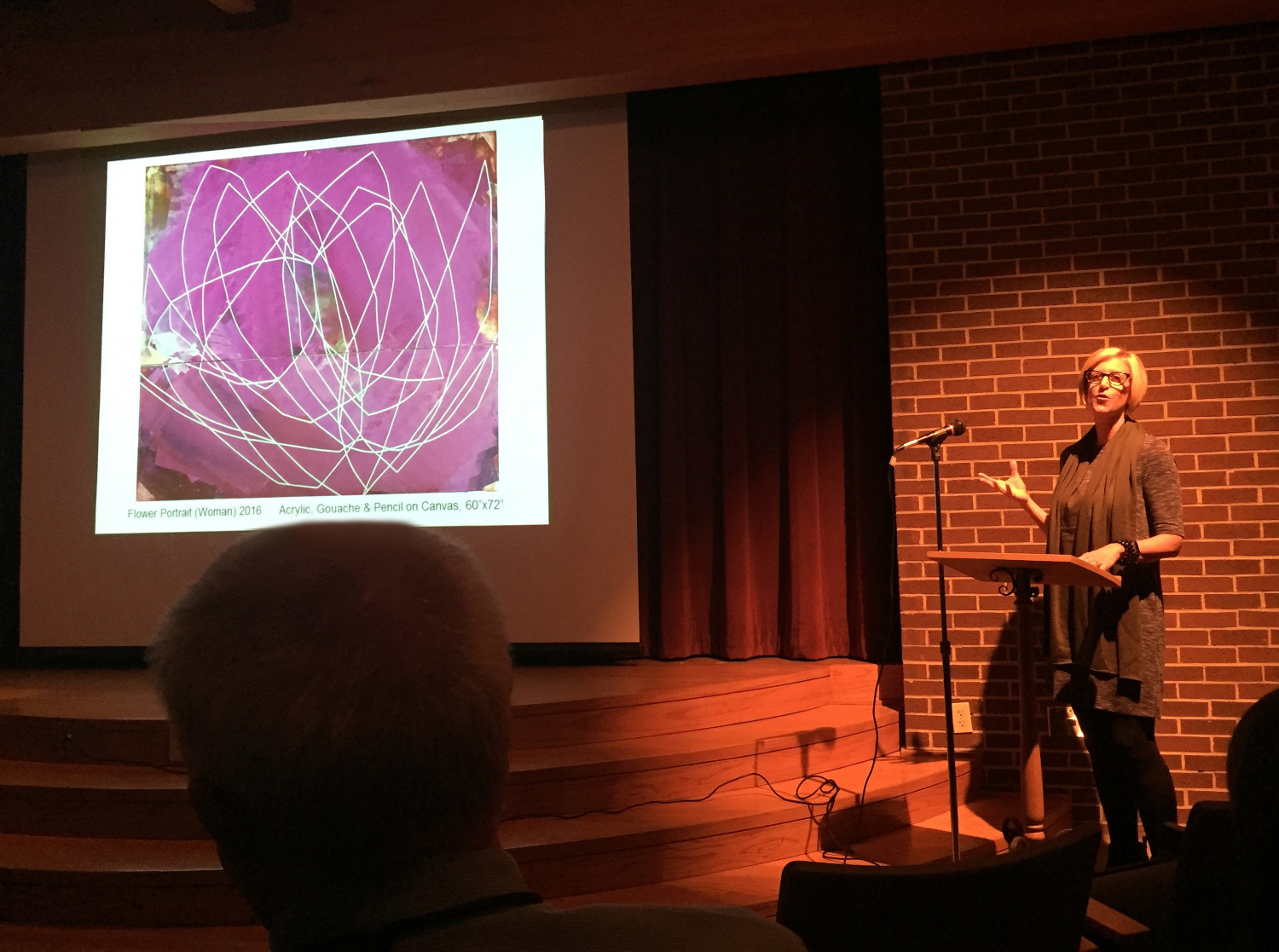 So honored to be one of the recipients of the Arkansas Arts Council Fellowship awards for 2016!
~

I had an opportunity this year to be part of a women's art show called WomanMade:NWA opening in April 2016.

I've been working on two distinct sides - first as the one who proposed, crafted, and helped curate the show, but also on the artist end - participating as a painter and creating a piece that will be shown alongside the other women artists.
~
We asked the artists to submit a piece that represented their “signature” creative work. Optionally, it could include or explore a topic, symbol, or idea that comes from a uniquely female perspective.

I created a painting called Flower Portrait (Woman) and wrote about the work below.
~ 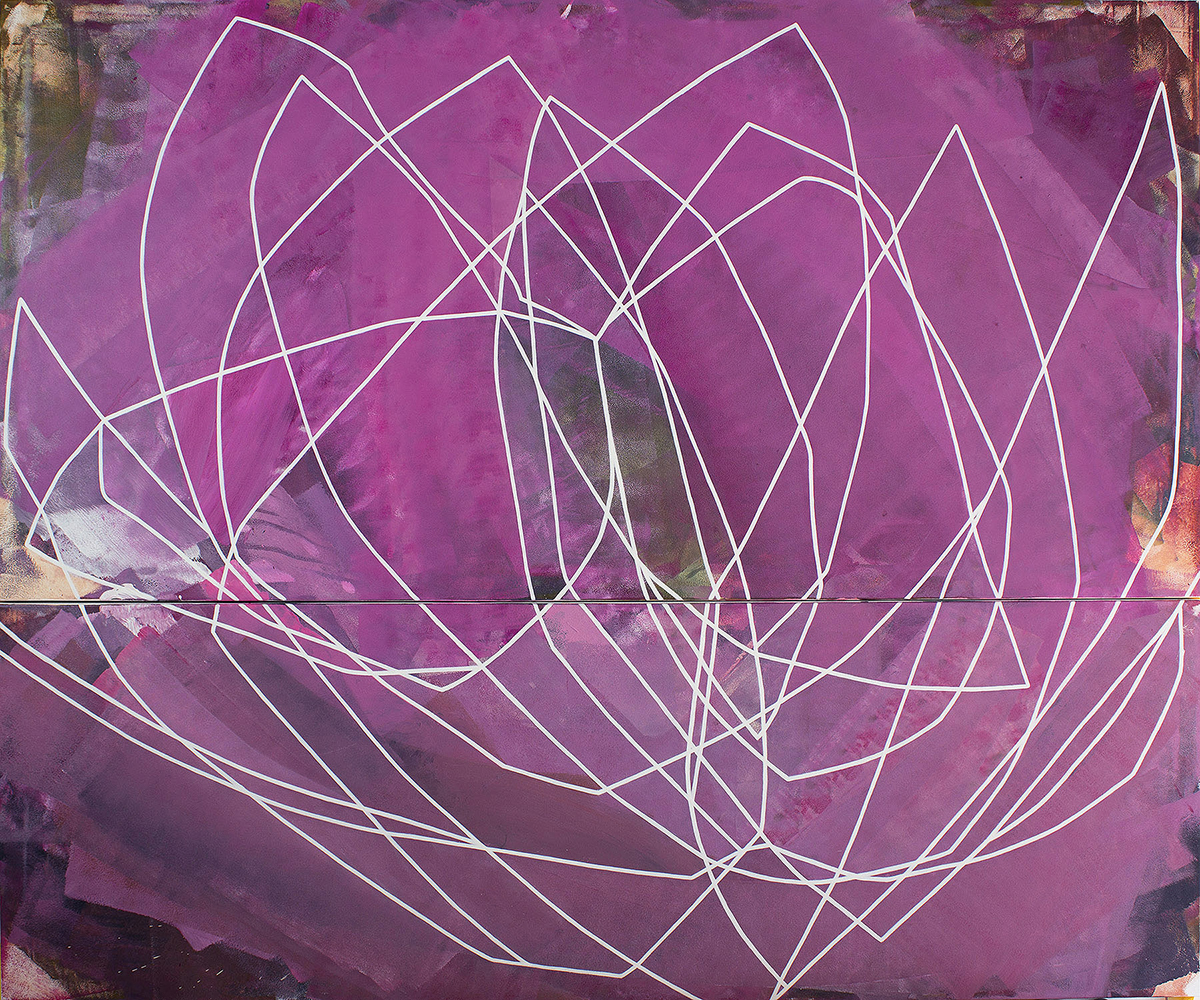 Originally for the show, I was going to create a large painting that studied and explored the color pink, as this is a hue that is typically associated with women and being feminine.

But I shifted to thinking about the piece more in terms of the current series I am involved with called Flower Portraits, where I paint large abstracted drawings of flowers.

I decided explore both of those ideas together to represent what is to me a distinctly feminine symbol – a pink flower.

This flower is not a specific bloom, but one that is made-up - a compilation of the lines and shapes of flowers that I keep with me in my mind.

The shades of pink in the painting express the full life cycle of a flower in terms of color.

The colors speak to the grit and perseverance of the journey where a flower seeds, grows, buds, blossoms, then slowly starts to fade, eventually falling back to the ground where it began.

There is beauty throughout the changing stages of being a flower/woman – the colors tell that story as they fluctuate between vibrant and muted; fresh and withered; dewy and ashy; pale and deep.

The underlying surface is rough and gritty, representing where a flower comes from symbolically – dirt or soil.

Above the horizon line, the upper canvas focuses on the time in the life of a blossom when it is in the state of being exquisitely and most abundantly alive – fully beautiful.

The lower horizon tells of the fading, quieting, and greying that happens as the flower’s life cycle is winding down - when it will be brought back into the earth.

On the horizon line itself; the colors cross over into one another – swaying between youthfulness/blossoming and quieting/aging.

The piece was done in two parts because I thought one canvas could not express or hold the full story of the flower and her life cycle.

Even though this is technically a portrait, I wanted the painting to read in a landscape format with a firm horizon line because I consider the landscape to be extraordinary – something that feels monumental and expansive. I represent the “woman as flower” symbol as the same – powerful, beautiful, intricate, complex, with a presence that spills over the edges of this canvas.
~

Want to say hello or ask a question? (click here)